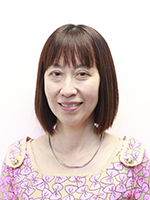 Hazel is the Deputy Director and Head of Library Administration and Operations at the Office of Information, Knowledge and Library Services (OIKLS). She oversees the human resources, staff development and administration portfolios.

Hazel was also the Chair of the inaugural Staff Engagement Committee from 2012 - 2015. She currently oversees the human resources and staff development portfolio, Office of Information, Knowledge and Library Services (OIKLS).

Hazel is a member of the Library Association of Singapore and has held various appointments: