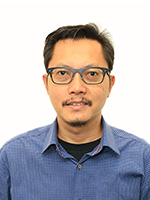 Rindra is the Assistant Director of NTU Library's Advisory and Consultation Team. His responsibilities include planning and providing leadership in the provision of advisory and consultation services and information support to faculty, researchers and students in the College of Humanities, Arts, and Social Sciences (CoHASS) among others. In addition to that, he also serves as a liaison librarian and provides outreach to the CoHASS cluster.

Before joining NTU Library in 2018, Rindra had the opportunity to work in a Graduate Research University, King Abdullah University of Science and Technology (KAUST) located in the Kingdom of Saudi Arabia.  He took up the role of Access and Digital Services Specialist (later Access Lead).  Some of his achievements during his stint at KAUST include: leading several projects in the area of Electronic Resources Management, Web Discovery Layer Services and Usability Study.

He has served on the following committees and groups:

He is currently serving on the following committees and groups: